This year as a seventh grader I got the chance to go to an amazing Shakespeare festival in Ashland. We got to watch two plays. One of them was called Guys and Dolls which was musical and I really enjoyed it. Another play we got to see was Much Ado About Nothing this one was my favorite out of the two, it was a romantic comedy and it was really funny. We also got to go to the place where they rehearse and we had a drama workshop type thing. It was a lot of fun because there were activities we got to do and learn about how plays are made and setup.

Besides the plays we did a lot of other fun things. We got about two hours to kind of explore Ashland. Some of my friends and I got pizza and tried lithium water which was really gross. We also got to go to stores and shop. On top of that I also got to stay a night in a hotel with three of my friends. And since the last play got done at around 10 or 11 they kept the pool open for us and we got to swim or hang out in our other friends rooms. Since there was a Starbucks on our way to the theater and we passed it on the way back to the hotel we got it a lot.

The world we are living today
I hope will be different tomorrow
By the time you grow up I hope
that you live in a world,
with no hate,
no judgement,
no cruelness
I hope that you can live in a world
where you don’t have to worry about tomorrow
where you can do what you really want
and be who you want to be,
where you won’t be hated

So this week we have a post that’s evaluating our blog. I have posted 10 blogs this challenge. They were all school based blogs that we had to do. I got four comments total but commented a lot on other people’s blogs. My sports post got the most comments, I think this happened because the sports I play might be the same as other people and we share something in common. I liked the posts where we got to write about whatever we wanted to and got a lot of choice in what we got to write. I did not get a chance to change my blog setup, I wanted to but I was afraid to mess everything up. I have four widgets, I think that this is not enough but I didn’t know what else to put. I should’ve customized my blog. I have no overseas bloggers on my blogroll but I had several of people that lived overseas that we both would frequently comment on each others blogs. I definitely grew as blogger, I feel like now the challenge is a lot more fun because I know how to twist it into my own thing. Also to be honest at the beginning I didn’t think the blog was going to be fun but after a while I began to look forward to the blogs because it was a challenge for me. These are some evaluations. I’m excited for summer but sad that our blogging challenge is coming to an end. You decide how the end of the challenge makes you feel and comment below.

Some interesting animals that not many people know about are the olm, gobi jerboa, and a pink fairy armadillo. An Olm is a blind amphibian found in underwater caves in lakes and underground rivers in southern Europe. The olm can als be known as a human fish because of its pinkish type colored skin. It’s is the only species in its genus and one place it can be found is in the depths of the Isonzo river basin. The olm lives its entire life in the darkness in underwater caves. One of its adaptations over time is its adapted to life without light. The olm relies on its hearing and smell to tell its surroundings. It is a carnivore, it eats small invertebrates like worms, insects, larvae, and snails. It has fewer predators because of where it lives but fish and other amphibians can eat it. 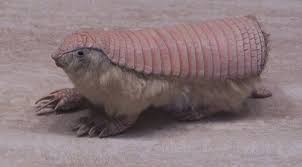 The pink fairy armadillo is the smallest of armadillos. They can be found in sandy plains, dunes, and grasslands. This mammal mainly lives in central Argentina. They’re main food they eat is insects, worms, snails, and plants. Pinks fairy armadillos have small eyes, and a yellowish fur color. There shell is attached to it body and helps protect it. These are just some of my favorite animals that when someone says animals they don’t necessarily think of.

I really like Madison’s blog about analyzation. I think she does really good at expressing herself and making her post funny and different than anybody elses. I like how she explains her personality in this post and is funny while she does. I don’t know if she’s trying to be funny but her post really grabbed my attention. I also really like her other blog posts. Visit her blog at http://madison6pm.edublogs.org/2014/09/29/passion-is-fickle/.

Another blog I liked was Jayen’s blog about a summer cruise that are going on this summer. I really like how they explained how they’ve been on the cruise before and they said what they liked about it and what they’re looking forward to. They also told about the things they were signed up for and activities they were going to do this time. They also wrote about where the cruise was going and things like that. Visit their blog at http://jayenjgsblog.edublogs.org/2015/05/12/174/.

I really liked Erica’s blog and her post. I really like how she decorated her blog. I also like her post about her dream dream vacation. It was really thought out and sounds like fun. Her whole blog is cool because it shows her personality and her personality comes through her writing. Her post is funny and unique. I like how she explains that she would go to England and why she thinks it’s cool and wants to go there. Visit her blog at http://erica1am.edublogs.org.

Emotions
whether your happy, sad, angry, annoyed
whatever you may be feeling inside just know other people
are feeling what you are and you are
not alone

If I was 18 right now I would probably want to go to college so that I could get a degree to probably be in the medical field. Once I graduated college I would find a job that fitted me and my interest. Once I got enough money I would take a break from that job and travel around the world and visit as many places and people as I could and learn there way of life. I love to travel but I’ve only been out of the state I would like to get out of the country and see the world from different perspectives. I would want to go to every continent and visit as many places as I possibly could except maybe Antarctica because it’s cold but it still would be cool.

I would want to travel for at least a year if I could and come back to the U.S. and maybe go to a lot of different states. I think it would be a lot of fun to travel the world. I’ve always wanted to go to France, Greece, and New York. Another place that I am interested in is Germany specifically in Berlin to see where the holocaust happened. I really like to visit place with a lot of history behind it. Like I went to Pearl Harbor which was really sad but really cool. I also think it would be so cool to get to go on the Great Wall of China. Scotland would also be fun I think. I would also like to go to India.

There are many beautiful places in the world that I want to visit. I think it would be so cool to go somewhere that was built hundreds of years ago or to go somewhere that has a lot of memories. I would like to see things that were built by people who were a live a long time ago and things that were built more recent and things that are no man made and that were created by nature. With all the different artifacts left in the world by earlier people or animals or nature are really cool. These are just a few things I would do if I graduated and could travel or do anything I wanted.

One of my favorite things to do are sports. I play soccer, volleyball, basketball, and softball as I’ve probably mentioned in one of my previous blogs or my all about me. My favorite out of those are probably volleyball and basketball. For volleyball and soccer I like to have the number 12 and for basketball and softball 40 or 24. To me the number 12 means a lot to me because my moms brother played soccer in his childhood but passed away when he was a teenager and I wanted to show his number.

A hobby that I love to do when I can is to go fishing. I’ve been fishing ever since I was a little girl, and it’s always been something that me and my dad do together and it’s a lot of fun to just get away for a day and spend it with him. My dad also shoots archery and we have an archery range behind my house thats on a hill. I have a bow but it’s hard to get the time to. That’s also a fun thing I get to do with my dad.

Snakes and ladders is a game played today known as chutes and ladders, it is an ancient indian game called Moksha Patam. When this game used to be played it was much more than a race around the board, it was a lesson for children to teach them about good and evil. To navigate the board means the journey of life, and philosophies of karma which was showing good deeds versus bad deeds. The ladders showed about faith and humility while the snakes were for lust and anger. This game showed how hard it was to take the good path instead of the bad one. This game was played a lot by younger kids to teach them at an early age.

Unlike the other board game chess is a little more complex. Chess is a game well known around the world. Chess is believed to have existed for over 2,ooo years. Historians believe it was developed around 280 – 550 in eastern India. Back then chess was known as chatura which means four divisions of the military. The pieces consisted of infantry, calvary, elephants, and chariotry, which today it’s pawn, knight, bishop, and rook. This game was popular in the Muslim world and all throughout Europe. Today chess is one of the most popular board games world wide.